The expansion connector system has changed a few times, which can cause confusion.

This page described the recommended way of using this connector with  NCC and Pro-120 controllers. You should use this system with the following controllers:

The changes affect mainly the model loco enthusiasts who use the system for double-heading. With the older system it was necessary to re-configure the expansion connector when going back to two independent locos. Sorry, but we can no longer support these older controllers.

The change does not affect use with tacho feedback – though this page has been re-laid to slightly clarify this.

The drawings on this page are on the Mark 1 controller (late issues) – however, the positioning of components in this area has changed little so they also apply to Mark 2 controllers.

It is not a good idea to mix Mark 1 controllers with Mark 2 (either Pro-120or NCC) as the circuit changed. The responses are slightly different and a mix will not work correctly.

However – it should be OK to mix a Mk2 NCC with a VTX controller.

The diagram shows a tacho board fitted in the Pro-120 expansion connector.

The circuit diagram of the expansion system is given on the NCC page. The Pro-120 circuit is the same as the VTX and NCC in this area but the pin numbers are different.

For double heading the following pins should be connected:

The drawing shows the expansion connector fitted to the NCC series controllers.

Pin 1 has a selectable alternative function: as standard, it feeds +9v to the connector to power the tacho feedback board. The alternative is that it be used to operate the ignition, which is required when, for example, double-heading a locomotive.

The expansion connector may by retro-fitted simply to NCC controllers issue 20 or later. Fitting is very similar to the Pro-120 but there are a couple of things that have to be done depending on whether the expansion is for double-heading or for a tacho feedback board; 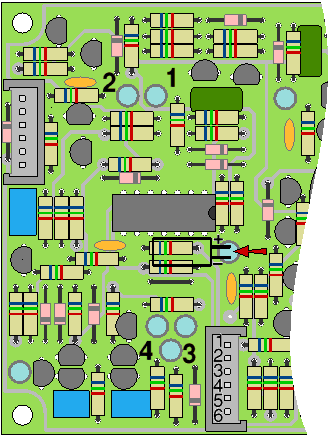 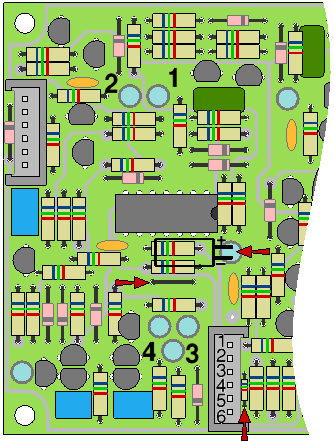 The drawing shows the area of the NCC round the expansion connector, viewed from the solder side. The arrows indicate

You will probably need to remove the ‘half speed reverse’ feature by removing the header, as described in the instruction manuals, as this feature is usually not appropriate to applications which use the expansion connector.

In theory it is possible to add more controllers simply daisy-chaining them together. But the are caveats, so this use of the controllers is unsupported.